Congratulations Cleveland!!! Cleveland Browns overcome history and adversity to win first playoff game for 25 years. They have their work cut out for them when facing the Kansas City Chiefs next.

The Cleveland Browns know all about hard knocks. The team hadn’t won a playoff game since 1995 before Sunday. Their head coach was in isolation after testing positive for Covid-19. So the weekend clash with division rivals Pittsburgh Steelers had all the earmarks of another painful evening for the long-suffering Browns fans. Now it’s the Browns’ turn to dish out the hard knocks. It was the franchise’s first postseason victory since 1994, and after a week where the team could only practice once because of Covid-19 protocols, acting head coach Mike Priefer praised the team’s resilience. “I told them after the game … I admire them so much and I respect them,” special teams coordinator Priefer said. “They have had so much adversity in terms of schedule changes — I know everybody has had adversity and I am not trying to say we had any more adversity than anybody else — but at the end of the day, this was a difficult week and a playoff week, but they never batted an eye.

Browns fans and players alike were understandably elated when the team secured their first playoff birth since 2002 last Sunday.However, for a fanbase so accustomed to the most heartbreaking scenarios — with painful losses and devasting injuries — it was perhaps unsurprising when head coach Kevin Stefanski and All-Pro guard Joel Bitonio tested positive for Covid-19 on Tuesday, meaning they were ineligible to participate in Sunday’s game.And in his pre-game press conference, Steelers wide receiver Juju Smith-Schuster referenced the Browns’ painful history and that this year’s team is no different than previous editions, saying: “The Browns is the Browns.”But the Browns emphatically put those demons to bed and after scoring a touchdown on the first snap of the game after an errant snap sailed over Ben Roethlisberger’s head, they raced into a 28-point lead, the biggest first-quarter lead in NFL playoff history. 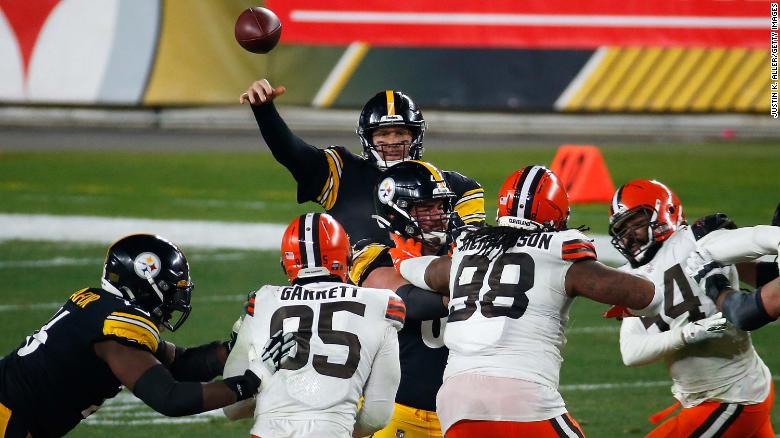 Roethlisberger throws a pass during the second half against the Browns. The Browns defense intercepted Roethlisberger four times, including twice in the first quarter, as the Steelers’ battled a double-digit lead for the entirety of the night. In fact, Roethlisberger became the first quarterback ever to throw four touchdowns and four interceptions in a playoff game.Mayfield finished with 263 yards and three touchdowns in the first playoff game of his career as, despite the Steelers mounting a second-half comeback, the 25-year-old quarterback managed to steer the Browns to their historic win.As Browns players ran off the field in Pittsburgh, they mocked Juju Smith-Schuster’s pre-game comments, with Mayfield yelling “The Browns going to be the Browns!” on his way to the locker-room.While Stefanski couldn’t be there to celebrate in person, he — and other missing players — were involved in the celebrations virtually via Zoom.”To have those guys there in our celebration was great,” Mayfield said. 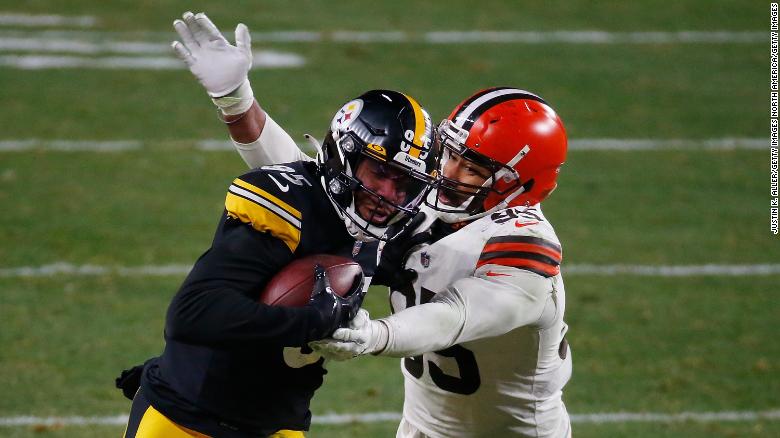 Eric Ebron of the Steelers is pursued by Garrett.”Like I said last week, it is just the stepping stone to where we eventually want to go. For a lot of guys, it was a huge win — my first playoff win, for starters — but nobody here is satisfied yet.”The Browns will now travel to Kansas City to face the No. 1 seed and defending Super Bowl champions Kansas City Chiefs at Arrowhead Stadium in the AFC Divisional Round next Sunday.