President Trump lobbied for LiAngelo Ball and UCLA teammates, according to White House

UCLA men’s basketball team back in LA, but 3 players remain in China over shoplifting case

Chinese lawyers agreed on one thing last week when discussing the complicated case of three UCLA basketball players arrested for shoplifting in Hangzhou, China, where they were visiting to play a game against Georgia Tech.

The quickest path to leniency and expediency through the strict and arbitrary Chinese criminal justice system was simple: Have President Donald Trump lobby Chinese President Xi Jinping during Trump’s visit last week to the country.

“President Trump can beg mercy to his Chinese counterpart,” Wen Yu, a lawyer based in the South China city of Guangzhou, told Yahoo Sports.

Trump probably didn’t “beg” for anything, but the Washington Post reported Monday he did raise the issue with Xi, according to spokesperson Sarah Huckabee Sanders.

Trump “personally” asked Xi “to help resolve the case,” the Post reported, citing an unnamed U.S. official. Xi reportedly said he would “look into the case and ensure the players are treated fairly and expeditiously.” That same official said the charges have been “reduced.”

The three freshman players, LiAngelo Ball, Jalen Hill and Cody Riley, are accused of shoplifting sunglasses from a Louis Vuitton store in a high-end mall near the team hotel early last week. ESPN has reported there is surveillance video of them also stealing from two additional stores. 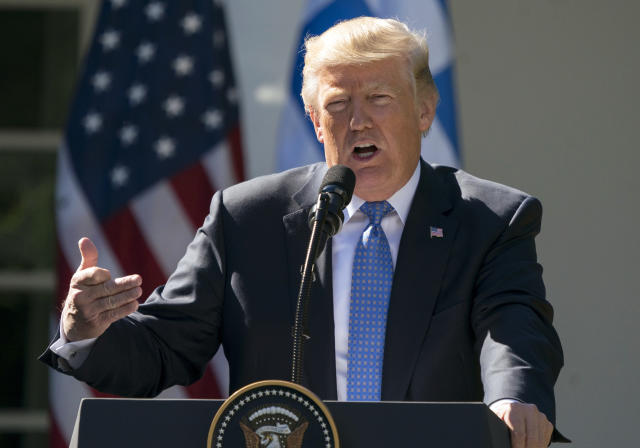 President Donald Trump speaks during a news conference in the Rose Garden of the White House. (AP)

LiAngelo Ball is the younger brother of Los Angeles Lakers rookie Lonzo Ball and the son of outspoken basketball entrepreneur LaVar Ball. The flamboyant self-promoter accompanied the team to China to film his reality TV show and briefly open a couple of outlet stores to sell the family’s Big Baller Brand sneakers.

Like Trump, LaVar Ball exudes self-confidence, runs a family business and rarely steers clear of publicity, but he’s been mostly quiet on this issue.

Maybe LaVar is being pragmatic for the sake of LiAngelo and the others. Maybe he is saving it all for his reality show.

LaVar and The Donald, working together to spring LiAngelo out of a Shanghai jail in a buddy movie that is so very 2017.

The three men were detained by local authorities after some 20 police officers came to the hotel and interviewed players on both teams. They were released from detention within 48 hours, but are now under a form of house arrest, confined to the Hyatt Hotel. The rest of the UCLA team left the country after defeating Georgia Tech on Saturday in Shanghai. At least one representative from the school has remained behind, according to the Los Angeles Times.

“We’re doing fine,” a UCLA associate athletic director told the Times when he was spotted heading into an elevator with the three players on Sunday. The players had no comment.

Neither UCLA, the U.S. consulate or Chinese officials have provided any comment. It is unknown how long the players must remain in China, or if their case is even close to resolved. Most experts consider it unlikely they would now be sent back to detention.

Chinese lawyers say by being released from detainment and sent to their hotel, the players have already received favorable treatment unlikely to be afforded to a Chinese citizen.

“It is quite unusual, but not as unusual for Westerners,” Wen Yu said.

Wen Yu previously said it would require government intervention for the Chinese legal system to show leniency. In China, local authorities can detain a suspected criminal for up to 37 days before even determining if they will be charged with a crime. There is no official system for American-style bail. And there is a fear from officials to show a double standard for Americans suspected of a crime.

“Without instructions from above, they [would] not let the students out easily because the authorities want to prove foreigners are treated equally here,” Wen Yu said.

That the players were released so quickly also speaks to the unusual nature of the case.

“Generally, the process is slow,” said Teng Baio, a visiting professor at the U.S.-Asia Law Institute at New York University. Getting sent to the hotel so quickly is “a very good sign” for the players, Teng Baio added.

It is uncertain what charges the three players are dealing with. No one knows the amount of goods stolen or if, indeed, there are multiple cases of shoplifting. The Chinese authorities are not even required to release that information to the defendants, lawyers say.

The Chinese could charge them with anything from robbery (a more serious crime that could command prison time) to the lesser shoplifting (which would be deemed an “administrative action” and could be punishable without a trial). The latter seems far more likely than the former at this point. Chinese prosecutors enjoy a 99.2 percent conviction rate according to Amnesty International.

If Trump is involved, though, it is unlikely to see an actual trial.

The UCLA Three could be home soon. Perhaps even before the next episode of “Ball in the Family.”