Now, as the department posts profiles of missing black and Latina girls in the nation’s capital on its Twitter feed almost daily, members of the Congressional Black Caucus are calling for a federal investigation.
In a letter Tuesday, the lawmakers asked Attorney General Jeff Sessions and FBI Director James Comey to “devote the resources necessary to determine whether these developments are an anomaly, or whether they are indicative of an underlying trend that must be addressed.”
“(W)hen children of color go missing, authorities often assume they are runaways rather than victims of abduction,” they added.
Sessions was briefed on the issue Friday, Justice Department spokesperson Sarah Isgur Flores said.
“The Attorney General is aware of the reports and is looking into the issue,” she said.
The FBI declined to comment on the matter. 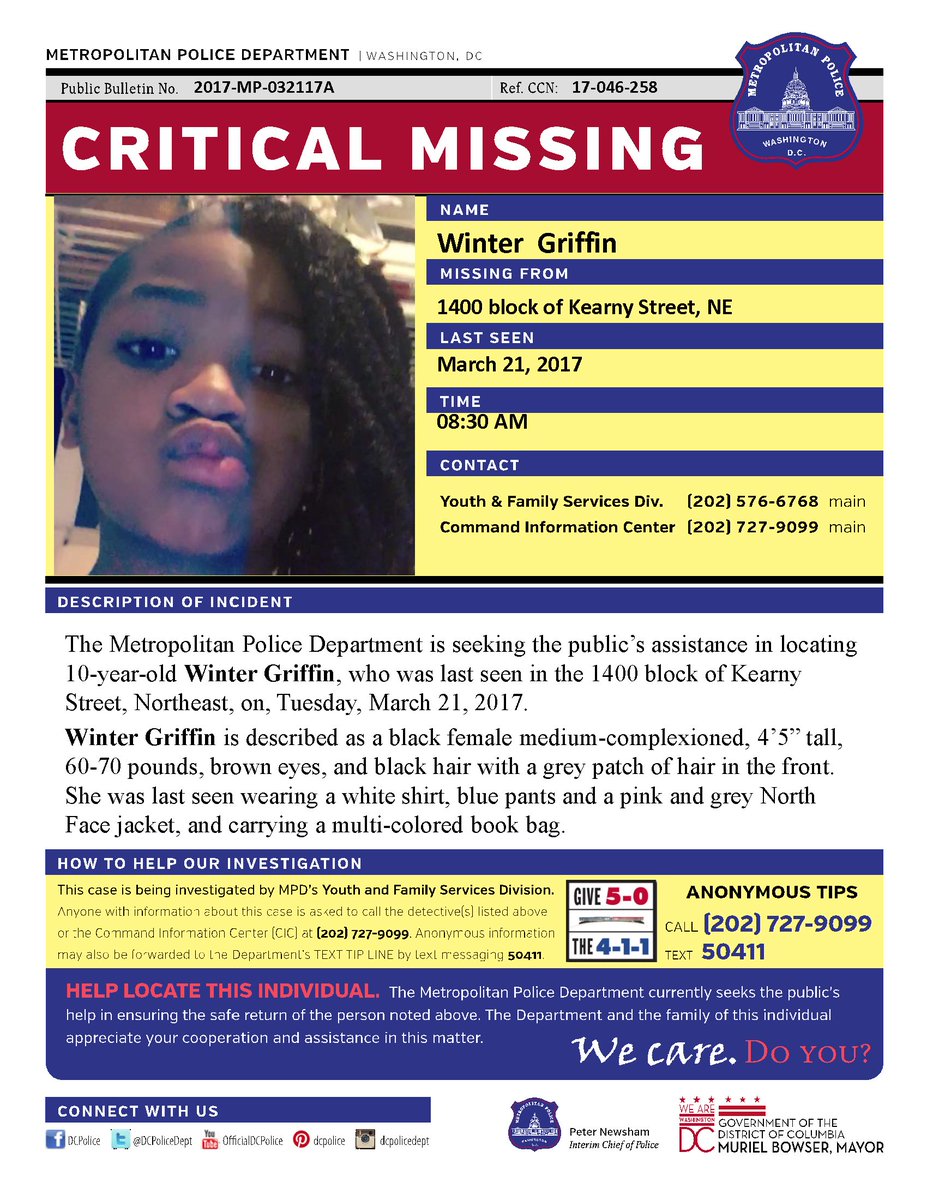 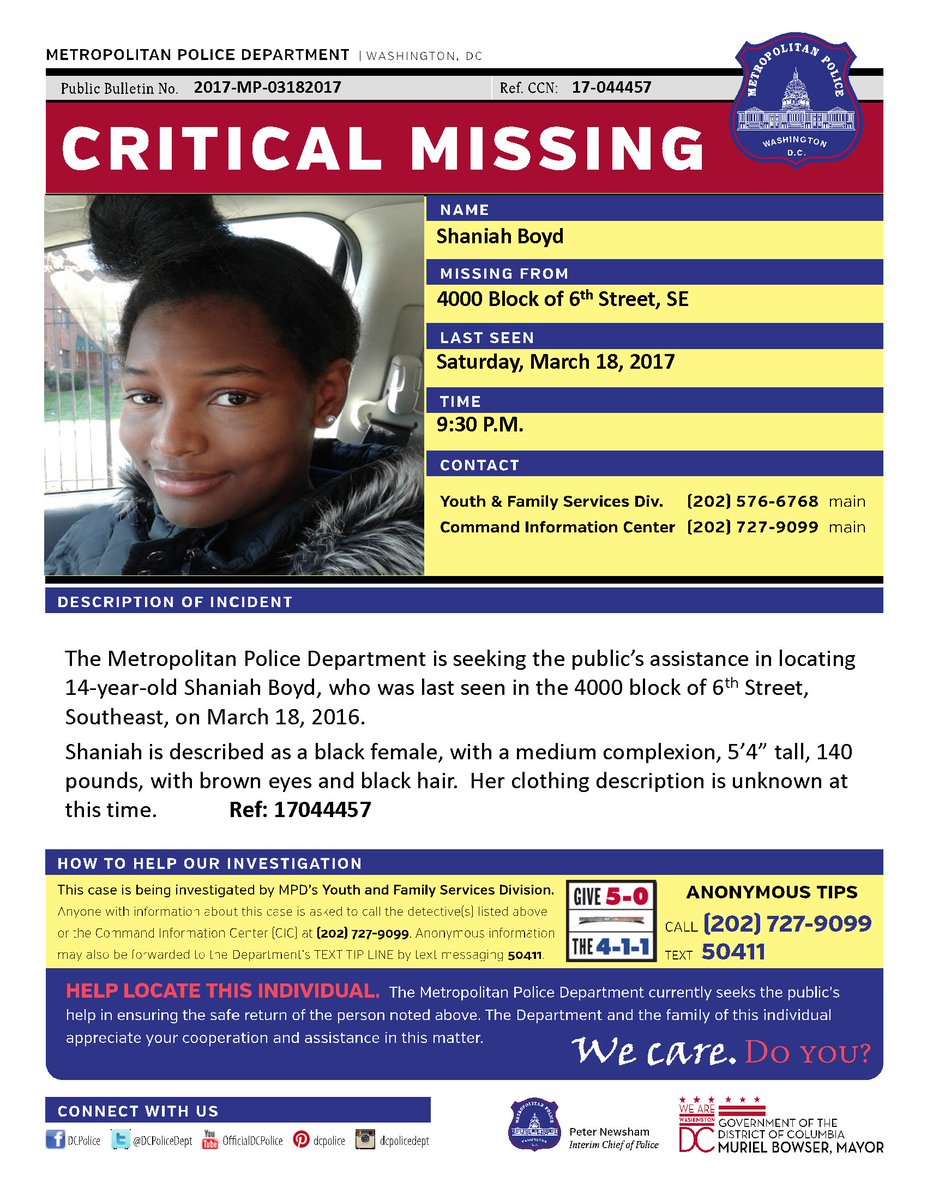 Although Dickerson, who heads the department’s Youth and Family Division, said Friday that the number of missing girls is decreasing, an outcry on social media has drawn increased attention to the issue this month and triggered the calls for federal law enforcement officials to investigate.

This is insanity!!!!!! #missingdcgirls

unite to find the #missingdcgirls !! This is unfathomable!

The Metropolitan Police Department recorded 501 cases of missing children so far in 2017, and said 22 cases were open as of Wednesday.
“We have received a lot of media attention and a lot of concern from the public because of the number of releases,” Dickerson said at a news conference on Friday. “There have been concerns that young girls in the District of Columbia are victims of human trafficking or have been kidnapped, or that there’s an increase in the number” who have gone missing.
“And I say this without minimizing the number of missing persons in DC — because one missing person is one person too many — but there’s actually been a decrease,” she added. “There is always a concern of human trafficking, but we have no evidence for this.”
Annual statistics show cases of missing children have remained relatively steady in Washington over the past several years — with 2,222 cases in 2014, 2,433 in 2015 and 2,242 in 2016.
CNN has requested a monthly breakdown of these figures to see how the 2017 numbers compare, but the Metropolitan Police Department did not immediately return requests for comment on those specific figures.
Still, numbers alone do not tell the entire story, DC City Councilmember Trayon White told HLN’s Michaela Pereira in an interview Friday.
“What the community is alarmed about — we had a 10-year-old girl missing the other day, but there was no amber alert,” White said. “We just feel like, you know, if this was a white person or from another neighborhood, there would be more alarm about it.”
“(A)ny time you have a 10-year-old missing for any amount of hours and no one knows where he or she is, that is rules for immediate attention, that’s an alert that needs to be sent out,” White added. “Because the more time that goes past, the less likely we are to find him or her.”
Numbers and Amber Alerts aside, Robert Lowery, a vice president at the National Center for Missing and Exploited Children, said he is grateful an important conversation about missing children is happening.
“I think the narrative is good,” Lowery said. “The more the public becomes aware of this issue of missing children, the more lives that can be protected and potentially even saved.”
While Lowery said the number of child abductions is down across the country, the level of runaway cases seen in DC and other major cities is particularly disturbing.
“Our frustration is, we deal with a very desensitized public,” Lowery said. “The natural inclination (about a runaway) is the child’s behavioral problem is why they’ve left. We also see significant numbers of runway children who are running away from a situation, whether it’s abuse or neglect or sexual abuse in the home. These children face unique risks when they’re gone so we applaud the conversation and we applaud the attention that this issue is being given.”
For more information, log on to http://www.cnn.com/2017/03/24/us/missing-black-girls-washington-dc/
Facebook Comments